How to play:
Boxes are placed approximately 20 feet away from each other, a distance often determined by a string attached to the front of each box. However, if a string is not attached to the box, one may take 10 paces from box-to-box, this will usually denote 20 feet.
​The throwing player stands next to or behind one box and tosses washers toward the other, normally using an underhand throw. Scoring is similar to horseshoes in that the second team to throw can wash-out/rebut any points that the first team may have scored, then add to their own total. 3 points are awarded to a non-rebutted ringer (a washer in the cup). 1 point is awarded to each non-rebutted washer inside the box. Games are normally played to 21 points.

The Lethbridge Sport Council has a washer toss game available to borrow through the online equipment forum!
The Washer Game Instructions

The referee spins the spinner, then calls out the body part and the color that the arrow points to. For example, the referee may call out: "Right hand, red." All players, at the same time, must then try to follow the referee's directions as explained below.
Strategy: Try moving toward an opponent's portion of the mat, forcing the player to go over or under you to place a hand or foot!Any player who falls, or touches the mat with an elbow or knee, is immediately out of the game. (If you feel that a new position is impossible, or will cause you to fall, you may eliminate yourself.) 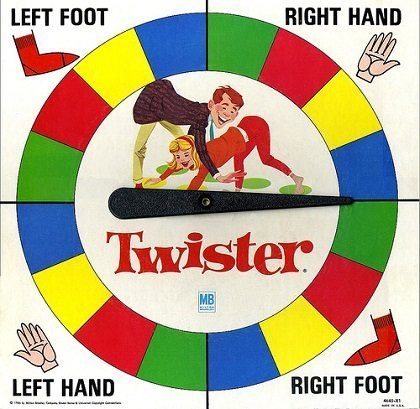